Biography of Jeremiah the Prophet

Jeremiah (c. 650 – c. 570 BC), also called the "weeping prophet", was one of the major prophets of the Hebrew Bible. According to Jewish tradition, Jeremiah authored the Book of Jeremiah, the Books of Kings and the Book of Lamentations, with the assistance and under the editorship of Baruch ben Neriah, his scribe and disciple.

In addition to proclaiming many prophecies of Yahweh, the God of Israel, the Book of Jeremiah goes into detail regarding the prophet's private life, his experiences, and his imprisonment.

Judaism considers the Book of Jeremiah part of its canon, and regards Jeremiah as the second of the major prophets. Christianity and Islam also regard Jeremiah as a prophet. His words are quoted in the New Testament and his narrative is recounted in Islamic tradition.

Jeremiah was active as a prophet from the thirteenth year of Josiah, king of Judah (626 BC), until after the fall of Jerusalem and the destruction of Solomon's Temple in 587 BC. This period spanned the reigns of five kings of Judah: Josiah, Jehoahaz, Jehoiakim, Jehoiachin, and Zedekiah. The prophetess Huldah was a relative and contemporary of Jeremiah while the prophet Zephaniah was his mentor.

Jeremiah was the son of, a kohen (Jewish priest) from the Benjamite village of Anathoth. The difficulties he encountered, as described in the books of Jeremiah and Lamentations, have prompted scholars to refer to him as "the weeping prophet".

Jeremiah was called to prophecy c. 626 BC by God to proclaim Jerusalem's coming destruction by invaders from the north. This was because Israel had forsaken God by worshiping the idols of Baal and burning their children as offerings to Baal. The nation had deviated so far from God's laws that they had broken the covenant, causing God to withdraw his blessings. Jeremiah was guided by God to proclaim that the nation of Judah would suffer famine, foreign conquest, plunder, and captivity in a land of strangers. 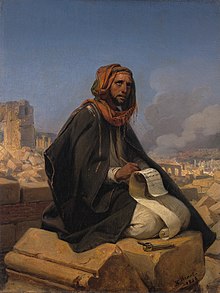 Horace Vernet, Jeremiah on the ruins of Jerusalem (1844)

According to Jeremiah 1:2–3, the LORD (YHWH) called Jeremiah to prophecy in about 626 BC, about five years before Josiah king of Judah turned the nation toward repentance from idolatrous practices. According to the Books of Kings and Jeremiah, Josiah's reforms were insufficient to save Judah and Jerusalem from destruction, because of the sins of Manasseh, Josiah's grandfather, and Judah's lustful return to the idolatry of foreign gods after Josiah's death. Jeremiah was said to have been appointed to reveal the sins of the people and the punishment to come.

Jeremiah resisted the call by complaining that he was only a child and did not know how to speak, but the Lord placed the word in Jeremiah's mouth, commanding "Get yourself ready!" The qualities of a prophet listed in include not being afraid, standing up to speak, speaking as told, and going where sent. Since Jeremiah is described as emerging well trained and fully literate from his earliest preaching, his relationship with the Shaphan family has been used to suggest that he may have trained at the scribal school in Jerusalem over which Shaphan presided.

In his early years of being a prophet, Jeremiah was primarily a preaching prophet, preaching throughout Israel. He condemned idolatry, the greed of priests, and false prophets. Many years later, God instructed Jeremiah to write down these early oracles and his other messages. 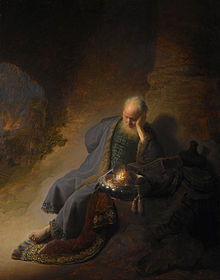 Jeremiah's prophecies prompted plots against him. Unhappy with Jeremiah's message, possibly from concern that it would shut down the Anathoth sanctuary, his priestly kin and the men of Anathoth conspired to kill him. However, the Lord revealed the conspiracy to Jeremiah, protected his life, and declared disaster for the men of Anathoth. [Jeremiah 11:18–2:6] When Jeremiah complains to the Lord about this persecution, he is told that the attacks on him will become worse.

A priest, Pashur the son of ben Immer, a temple official in Jerusalem, had Jeremiah beaten and put in the stocks at the Upper Gate of Benjamin for a day. After this, Jeremiah laments the travails and mockery that speaking God's word have caused him. [Jeremiah 20:7] He recounts how, if he tries to shut God's word inside, it burns in his heart and he is unable to hold it in. [Jeremiah 20:9]

According to the book of Jeremiah, during the reign of King Zedekiah, the Lord instructed Jeremiah to make a yoke with the message that the nation would be subject to the king of Babylon. The prophet Hananiah took the yoke off Jeremiah's neck and broke it, prophesying that within two years the Lord would break the yoke of the king of Babylon, but Jeremiah prophesied in return: "You have broken the yoke of wood, but you have made instead a yoke of iron." [Jeremiah 28:13]

Relationship with the Northern Kingdom (Samaria)

Jeremiah was sympathetic to, as well as descended from, the northern Kingdom of Israel. Many of his first reported oracles are about, and addressed to, the Israelites at Samaria. He resembles the northern prophet Hosea in his use of language and examples of God's relationship to Israel. Hosea seems to have been the first prophet to describe the desired relationship as an example of ancient Israelite marriage, where a man might be polygamous, while a woman was only permitted one husband. Jeremiah often repeats Hosea's marital imagery.

The biblical narrative portrays Jeremiah as being subject to additional persecutions. After Jeremiah prophesied that Jerusalem would be handed over to the Babylonian army, the king's officials, including Pashur the priest, tried to convince King Zedekiah that Jeremiah should be put to death for disheartening the soldiers and the people. Zedekiah allowed them, and they cast Jeremiah into a cistern, where he sank down into the mud. The intent seemed to be to kill Jeremiah by starvation, while allowing the officials to claim to be innocent of his blood. A Cushite rescued Jeremiah by pulling him out of the cistern, but Jeremiah remained imprisoned until Jerusalem fell to the Babylonian army in 587 BC. [Jeremiah 38]

The Babylonians released Jeremiah, and showed him great kindness, allowing him to choose the place of his residence, according to a Babylonian edict. Jeremiah accordingly went to Mizpah in Benjamin with Gedaliah, who had been made governor of Judea. [Jeremiah 40:5–6]

Johanan succeeded Gedaliah, who had been assassinated by an Israelite prince in the pay of Ammon "for working with the Babylonians." Refusing to listen to Jeremiah's counsel, Johanan fled to Egypt, taking with him Jeremiah and Baruch, Jeremiah's faithful scribe and servant, and the king's daughters. [Jeremiah 43:1–13] There, the prophet probably spent the remainder of his life, still seeking in vain to turn the people back to God. [Jeremiah 43:1–13]. There is no authentic record of his death. (Wikipedia)

Kings of Israel and Judah

The Last Five Kings of Judah